SAVE ON SHIPPING of select major brands! Warehouse PICKUP NATIONWIDE available. CLICK here for location near you!

What is Engineered Hardwood

One of the properties of hardwood is that it is subject to weather changes and seasons. It absorbs moisture from the air, causing it to swell if there is a lot of moisture in the air and causing it to shrink if there is little moisture in the air. For this reason, engineered hardwood is sometimes a favorite over solid hardwood because it is more versatile, and more stable than hardwood, since it is less likely expand and contract due to the amount of humidity in the air.

The plywood core is constructed by gluing and compressing layers of thin wood together in a crisscross pattern. The high density fiberboard core is made from recycled hardwood, which is manufactured by grinding damaged or defective hardwood into a sawdust and mixing it with a resin, then, compressing it together to form HDF core. This makes the much HDF core much harder, more durable and less susceptible to moisture than a plywood core. For this reason, the HDF core is recommended for areas with high humidity, drastic climate changes or near bodies of water.

However, in the event of water damage from flooding, no flooring is water proof and either type of core will swell. The HDF core will not absorb as much water as the plywood core, but there is a higher chance that the plywood core will shrink back down to its original size after it dries out. In most cases of flooding, either type of flooring will probably have to be replaced. One thing to keep in mind though, is that water damage from flooding is most likely covered by your homeowner’s insurance policy, so it will cover the cost of replacing your flooring if that is necessary.

At Woodwudy Wholesale Flooring, we are here for you!  If you need any assistance or additional information, please call our trained flooring specialists at 1-877-966-3983.

Let customers speak for us

I installed 4" wide 3/4 solid red oak from Woodwudy. I mixed #1 and #2. I used the bona wood filer, one coat of Bona amber seal and two coats Bona Mega One finish. In the past I used oil based polyurethanes. Bona finish is so much easier to apply, it doesn't stink, I haven't use the respirator, it dries so quick that there is little chance for any dust to set in it. It is hard, I had a hard time to scuff it between the coats and had to use sandpaper instead the scuff pad. I was covering 800 sg/ft. with 2 gal of sealer and 3 gallons of Bona Mega One. The covering is very close to 550 sq/ft per gallon. The cost of finish was about $1.80 per sq.ft, without the sending. I am putting 4 stars, because this product is expensive, but if I would have to decide to do it again I would use Bona Mega One. The ease of application, the absence of lingering smell comparing to oil based poly is excusable for the extra cost. I can not asses the durability yet. 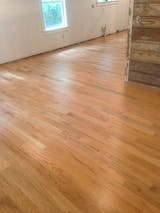 Easy to trowel on and easy to sand off with the floor sander.

Purchased the Xulon Monticello Cocoa for my kitchen and it looks amazing! It was easy to install and is the perfect addition! The price was low and affordable! Can't wait to purchase more flooring for our next few projects! Thanks Woodwudy!!